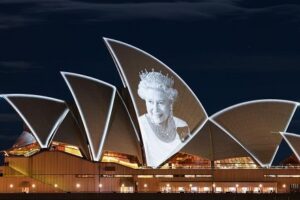 I grew up in a house of royalist paraphernalia – tea towels, cups and saucers, teapots, display plates, books, etc. This was due to my mum not my dad. Mum’s ancestry was Ulster Presbyterian. As a child she marched annually with the Orange Lodge through the centre of Liverpool while Roman Catholics spat and jeered. My dad would watch the parade passing by unaware that his future wife was the young girl dressed as William of Orange. I don’t think any of mum’s immediate family were Christians, nevertheless, their world was shaped by belief in God, king, and country – the Protestant God, king, and country. One of mum’s uncles married a Catholic and it split the family. My parents didn’t attend church, yet I knew that God was on side with the Church of England and Catholicism was trouble.

In that general spirit, I was raised with the view that the monarchy is a good institution; a flawed institution, but we were the better for it. My mother particularly held Queen Elizabeth II in high esteem. While I don’t regard myself a monarchist as such (even though I probably am), mum’s influence has remained. From a Christian perspective, I do believe that our recently departed Queen should be held in high esteem. From a Christian perspective, I am also a little more charitable to Roman Catholics.

Whatever one’s views on the monarchy and the republic, Queen Elizabeth maintained a credible profession of faith for 70 years. While so many high-profile pastors have brought shame to the name of Christ, the Queen did not. Throughout her long reign, she undertook her responsibilities with faithfulness, dignity, charity, and perseverance. Sounds a lot like the fruit of the Spirit to me. There is nothing to suggest a duplicitous life. She spoke openly and clearly of her faith in Christ and that is how she lived. An example for us all.

“I put my trust in God… I draw strength from the message of hope in the Christian gospel.”

“For me, the life of Jesus Christ, the Prince of Peace whose birth we celebrate today, is an inspiration and anchor in my life. A role model of reconciliation and forgiveness, He stretched out his hands in love acceptance and healing.”

“Although we are capable of great acts of kindness, history teaches us that we sometimes need saving from ourselves—from our recklessness or our greed. God sent into the world a unique person—neither a philosopher nor a general, important though they are, but a Saviour, with the power to forgive.”

For those who criticize her speeches – bear in mind the vast majority she didn’t write, nor were they intended to be sermons. For those who criticize her ecumenical spirit – bear in mind the difficult position she held in a changing world. For those who expected “penal substitution” in her Christmas addresses, the Queen was not a theologian nor a preacher. And yet, she didn’t merely speak of God in a generic sense, but of Jesus Christ the Saviour, and the Gospel. When with chest-beating righteous indignation we want to criticize Queen Elizabeth (or others for that matter), let us remember Noah, Abraham, Moses, and Samson held up as examples of faith in the Bible. A motley bunch to say the least. Let us remember the repeated faux paus and failures of the Apostle Peter. God doesn’t require perfect faith, only genuine faith. And genuine faith is weak, inconsistent, and flawed.

As a boy we used to sing God save the Queen at school. How times have changed. I believe for good reason we can say that God did save the Queen. May He also save King Charles III – who unfortunately up till this point, has not followed in the faith of his mother. The Queen is dead long live the King.