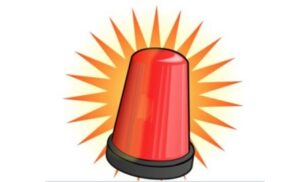 Until recently, cooking a roast in our house meant one thing (besides an appetising meal), the smoke alarm would scream whenever the oven door was opened. Then, out of the blue it began making itself heard for no apparent reason whatsoever. One morning it started at 5:00. Having made sure there was no actual fire, fed up with false warnings I got a ladder and removed the battery.

The Bible tells us to be aware of false prophets and their alarmist messages. Luke 17:20-23, “Now when He was asked by the Pharisees when the kingdom of God would come, He answered them and said, “The kingdom of God does not come with observation; (21) nor will they say, ‘See here!’ or ‘See there!’ For indeed, the kingdom of God is within you.” (22) Then He said to the disciples, “The days will come when you will desire to see one of the days of the Son of Man, and you will not see it. (23) And they will say to you, ‘Look here!’ or ‘Look there!’ Do not go after them or follow them.”

As it was in the first century, so it is in the 21st century. Of Christ’s return we can be certain of the timing we cannot. Nevertheless, many of the cults continue to make predictions and draw followers to themselves. Evangelicals also succumb to this kind of thinking – somehow within the mystery of the Parousia, scripture is used to gauge where we are on the timeline. How does such thinking measure up in light of the following?

* The angels do not know when Christ will return.

* During the days of His earthy ministry, Christ did not know when He would return (Mark 13:32)

* When the flood came life was perfectly normal and without any signs of its imminence, so it will be when the Son of Man returns.

* Jesus said He will come like a thief in the night. Thieves don’t usually drop hints of when they intend to visit your neighbourhood (1Thess 5).

* Paul uses the analogy of pregnancy (1Thess 5). An expecting woman doesn’t know when the baby will arrive. The little one could be weeks premature. She may be ‘overdue’ and induced.

The world is not in great shape and this has led many Christians to suppose the end is nigh – the signs are adding up. What signs exactly? I have read of couples reluctant to have children, others live with a kind of bunker down mentality. Every generation supposes that it must surely be the last. We are to leave the secret things to God and get on with the business of living out the Gospel. Always be ready. Always be walking with Christ.