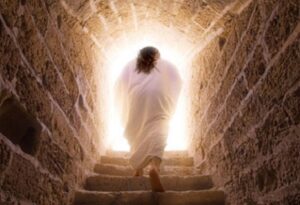 God the Father raised Christ from the dead. Acts 2:32, “This Jesus God has raised up, of which we are all witnesses.” Gal 1:1, “Paul, an apostle (not from men nor through man, but through Jesus Christ and God the Father who raised Him from the dead)”

God the Son raised Himself from the dead. John 2:18-21, “So the Jews answered and said to Him, “What sign do You show to us, since You do these things?” (19) Jesus answered and said to them, “Destroy this temple, and in three days I will raise it up.” (20) Then the Jews said, “It has taken forty-six years to build this temple, and will You raise it up in three days?” (21) But He was speaking of the temple of His body.” John 10:17-18, “Therefore My Father loves Me, because I lay down My life that I may take it again. (18) No one takes it from Me, but I lay it down of Myself. I have power to lay it down, and I have power to take it again. This command I have received from My Father.”

Who raised Christ from the dead? The Triune God collectively and each member individually raised Him from the dead. In all the works of God, all three members are actively involved. They don’t all do the same things, but they all participate as per their designated roles – the Father is the architect of salvation and sent His Son into the world. The Son came and led a perfect life and died on the cross. The Holy Spirit applies the work of salvation beginning with regeneration. Accordingly, we are baptized in the name of the Father, the Son, and the Holy Spirit.

When it comes to the resurrection, Christ had to raise Himself from the dead or there would be no salvation. It was not just a matter of Him coming back to life by the power of the Father and the Spirit, it had to be through His own power. If Jesus was raised only by an external power, His resurrection would be no different to the other resurrections in the Bible – the widow of Zarephath’s son, the Shunamite’s son, Jairus’s daughter, Lazarus, Tabitha (Dorcas), etc. What is the common factor in these resurrections? The deceased were powerless to do anything about their condition. Death had conquered them.

Salvation is a reality because Christ Himself conquered death. He submitted to judicial death upon the cross bearing our guilt. He then raised Himself back to life overcoming death on our behalf, demonstrating that He is truly the Son of God. When the widow of Zarephath’s son was raised to life, he had not conquered death. He died again. His resurrection pictured or anticipated a much greater resurrection. A resurrection which does away with death forever. 1 Cor 15:57-57, “O death, where is your sting? o hades, where is your victory?” (56) The sting of death is sin, and the strength of sin is the law. (57) But thanks be to God, who gives us the victory through our Lord Jesus Christ.”