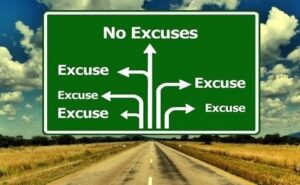 Excuses, we all make them. Excuses for not doing what God wants; excuses for doing what God does not want.  Excuses are the default position of fallen human beings. When God confronted Adam with his sin, Adam immediately excused himself. “The woman whom You gave to be with me, she gave me of the tree, and I ate.” We have been making excuses ever since.

Excuses for sin are bred between layers of Christian cliche and scripture taken out of context. Here are five common excuses that believers make.

Christians aren’t perfect just forgiven. I first saw these words on a bumper sticker when I was about 16. At the time I didn’t really understand what they meant, but I do now. The sticker was announcing to the world that Christians are just as sinful as everyone else. Don’t expect Christian people to be different, they do all the same stuff you do, only God forgives them. If you want forgiveness for the sinful things you enjoy, become a Christian.

We are under grace not under law. Rom 6:14, nor any other verse nullifies the necessity of obedience. We are not under God’s law as a covenant of works, but we are most certainly under God’s law as a rule of life. Salvation by grace apart from works does not mean we are free to live as we choose. We are saved from the dominion of sin so that we can walk in righteousness. That is Paul’s point in Rom 6 as he draws attention to baptism and its meaning for daily life. We have been raised with Christ; therefore, we are to live accordingly.

I have my weaknesses and you have yours. This is a two-pronged excuse. Firstly, there is acceptance of one’s sinful appetites – “I have my weaknesses”. It is true that we do have personal weaknesses, this does not mean that we should live happily with them, feed them, and do nothing to mortify them. Secondly, it involves finger pointing – “you have your weaknesses as well.” When some people are confronted with sin, they like nothing more than to draw attention to others. The underlying argument is this – if you sin, so can I. Who are you to address me?

I am praying about it. We need to confess sin and pray for grace. But prayer is not in lieu of action. Jesus did not say, if your right eye and your right-hand cause you to sin, go and pray about it. He said, pluck your eye out and cut your hand off. In other words, take action. The Apostle Paul did not say regarding the old man (corrupt nature), go and pray about it. He said put it off and put on the new man created in Christ Jesus. In other words, take action. The call to repentance is not a call to prayer, it is a call to change direction. It involves prayer, but it doesn’t stop at prayer.

Excuses get us nowhere. It is a way of covering over our sin. Prov 28:13, “He who covers his sins will not prosper, but whoever confesses and forsakes them will have mercy.” Don’t excuse, rather confess and forsake.