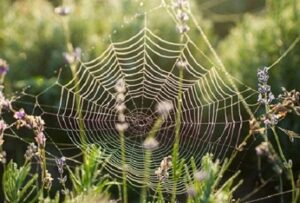 New England pastor / theologian / philosopher Jonathan Edwards liked nothing more than to wander through the woods. He was a keen observer of the natural world and in everything he saw the divine fingerprint. With God’s glory and goodness abounding all around him, he regarded it as a spiritual classroom. Edwards loved insects, but of particular interest were spiders. He wrote an essay on them at the age of 11 in which he states, “of all insects, none is more wonderful than the spider.” In July 1741, Edwards preached what was to become his most well-known sermon and published work – “sinners in the hands of an angry God”. In that sermon he likened sinners to a spider dangling on its web over a fire. In other writings he speaks of his admiration of spiders for their industry, their ability to jump and glide through the air, and create beautiful webs.

As Christians, God has opened our eyes to spiritual realities, and as such, we should not just see, but observe. To observe is to pay attention, it is look closely and take note. Observation for Jonathan Edwards was to perceive the hand of the Creator in the beauty, the intricacy, the variety, the complexity of His creation. The Christian poet Luci Shaw, who like Edwards pays homage to God in creation, was once asked the question, “don’t you get tired of noticing things?” In response she quoted Anne Dillard – “we are here to abet creation and to witness it, to notice each thing, so each thing gets noticed, so that creation does not play to an empty house. Beauty and grace are performed whether we sense them or not. The least we can do is try to be there”.

In Psalm 19, David rejoices in the God whose glory is expressed in the vastness of the heavens; the God who holds the stars in their place and sends the sun on its circuit. This same God who transcends the universe also inhabits the world of ordinary things. There is no less of the divine presence in an autumn leaf falling to the ground, ants busily building and foraging, frost on the morning grass, the sound of wind through tree branches, the smell of salty sea air, or a spider spinning its web. The majesty and glory of God is all around for us to take in – observe.

God’s classroom is all around. The scriptures draw our attention to the lilies of the field; the birds of the air; the plight of seeds; the condition of soils; the genius of ants; the cycle of water; the stability of mountains; the brevity of mist; the sweetness of honey; the stealth of snakes; the gentleness of doves; the effect of drought, etc. We are not confined to observe only those examples found in the Bible. We are to use our imaginations, sanctified for God’s glory. Jonathan Edwards saw  spiritual realities in everything from rainbows to roses, silkworms to sunlight.

Great God of ordinary wonders. May we look, listen, learn, and lift up our hearts in adoration.