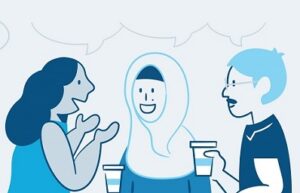 I recently watched a short interview on YouTube as part of a series called “Side by Side”. The idea is to contrast different outlooks in life whether they be political, cultural, or religious. The episode I watched involved a 28-year-old male attorney who is an atheist and a stay-at-home mother who is a Christian.

The Christian woman focused on faith in terms of her day to day life – what it means as she engages with the world around her and she and her husband raise their daughter. She made the point that Christians are accused of being anti-intellectual which is not true; she believes that there must be a place for spirituality in all of us because that is how we are made. She pointed to the fact that the evidence for God is all around us and life is richly enhanced as we come to know Him. At the time of the interview she was pregnant and seeking to use that season to deepen her faith; she said she craves to learn more and wants to grow as a Christian. I don’t know what her specific beliefs are or what kind of church she attends; I wish she had said more about Christ, regardless, I found myself warmed as I listened to her.

It made me wonder what the attorney lives for; what does he make of it all. I got my answer at the end of the interview. He said that being an attorney gave him meaning; it made him happy to know that he is part of the judicial process which helps people. He said that he and his friends were all just trying to find some meaning in an apparently meaningless universe. And in this statement we have the world view of atheism – “trying to find some meaning in an apparently meaningless universe”. He seemed like a nice enough fellow, but he left me feeling cold and empty. His outlook is bleak and void of reality. I shudder at the thought of going through life with his views.

“Side by Side” is an interesting way to look at contrary opinions – albeit for 5 minutes. Perhaps we can take something from it at a practical level – the usefulness of getting alongside unbelievers in order to engage with them. Personal interaction enables us to build bridges and address specific issues related to faith. Listening to others helps us to think through what we believe and to articulate our beliefs in a meaningful way. Let us prayerfully seek to come side by side with the unbelievers whom God has placed around us.