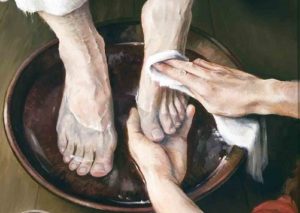 John 12 opens with a most beautiful scene of devotion. Christ and His friends are dining at the home of Simon the leper in Bethany. At the conclusion of the meal Mary takes an expensive flask of spikenard oil and anoints Him. She pours it over His head; she pours it over His feet and dries them with her hair. The whole room is permeated by the fragrance of the oil.

John 13 opens with an even greater scene of devotion. Christ and His disciples are celebrating the Passover in an upper room in Jerusalem. At the conclusion of the meal He takes a towel and a basin; He fills the basin with water and washes the feet of His disciples.

Two foot washings; they were both acts of devotion, yet they were also very different in nature. For the Son of God to wash the dirty feet of sinners, it was an act of utmost condescension and humility. When Mary anointed Jesus’ feet, it was the highest possible honour she could have. Importantly, Mary’s devotion was only possible because of Christ’s devotion. When He washed the feet of the apostles it served two main purposes:

Christ revealed the way of salvation. The foot washing pictured a much greater washing. John 13:6-8, ‘Then He came to Simon Peter. And Peter said to Him, “Lord, are You washing my feet?” 7Jesus answered and said to him, “What I am doing you do not understand now, but you will know after this.” 8Peter said to Him, “You shall never wash my feet!” Jesus answered him, “If I do not wash you, you have no part with Me.’ Only those who have had the guilt of their sin washed away can know God and will worship Him from the heart. Mary is an example of such a person.

Christ revealed the way of discipleship. John 13:15, ‘For I have given you an example, that you should do as I have done to you’. As Christians we are to embrace the same spirit of servitude. If He willingly stooped down to such a depth for us, how much more so should we be willing to serve in His kingdom? There is however a radical difference – when we serve Him, it is not to be brought down low but to be raised to the place of privilege and honour. What we do to others in His name, we do to Him.

The two foot washings on one level are very similar and on another level they are very different. Together they remind us of a vital reality: Christ condescended in order to provide us with what we don’t deserve. If we have understood the magnitude of this, we will gladly rise up in order to give to Him what He does deserve.