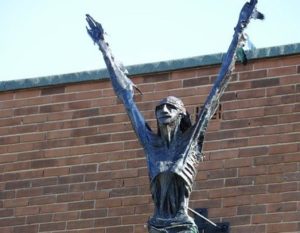 Just recently I watched a couple of documentaries on Arthur Dooley. Arthur was born and lived in the hometown of my parents – the majestic Liverpool. For a time he served in the British army; later he worked on the Liverpool docks and also as a cleaner at an art school. It was while at the art school he took up an interest in sculpting. His medium became scrap metal and bronze; he specialized in sculptures with religious themes, most notably the resurrection. Many of his works can be found in church buildings, civic buildings and parks around the UK as well as on the Continent. I must say I find his skill and imagination very impressive – even if I don’t like some of the sculptures themselves.

During various interviews he explained his religious views. Arthur believed that the Roman Catholic tradition in which he was raised, placed too much emphasis upon the crucified Jesus – church buildings being inundated with crucifixion imagery. He said that Christ is risen and this is how we should see Him; the cross is now empty.

What emerged however was a man who had no idea as to what the resurrection actually meant. Arthur spoke about it pointing to the idea of triumph over adversity; the oppressed breaking out into new life. He spoke about the unemployed finding meaning through work; people with latent creative talent given the opportunity to express themselves in the arts. He didn’t know what the afterlife involved or even if there was an afterlife; for him, the resurrection is about this life. The masses are downtrodden with so much energy and potential going to waste. The resurrection provided the inspiration to rise to better things.

Arthur correctly recognized that we must look beyond the cross. The Biblical logic is obvious – no resurrection and the cross is meaningless (1 Cor 15). Yet for all of his passion and creativity he missed the truth. Jesus’ resurrection points us not to fulfilled potential in this world, but to eternal life beyond this world. It guarantees forgiveness of sin and reconciliation with God for all those who trust in Christ. It guarantees our own future resurrection and a new heavens and new earth in which we will forever dwell in the presence of God. 1 Cor 15:22, “For as in Adam all die, even so in Christ all shall be made alive”

Sadly, it would seem that Liverpool’s famous sculptor died without hope even though he devoted so much time and energy to creating images of Jesus Christ the ‘resurrection and the life’.