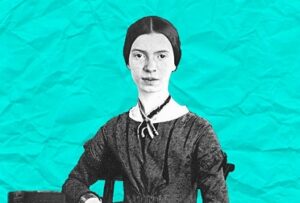 In her poems, Emily Dickinson expressed much about faith and her struggles with doubt. It is common for people today to speak of being spiritual while rejecting religion. To a certain extent that typifies how Dickinson saw herself. She believed in God yet railed against elements within the organized church. In one poem she quipped, “Some keep the Sabbath going to church / I keep it, staying at home / with a Bobolink for a chorister / And an Orchid, for a dome”

She saw a place for faith “Faith – is the pierless bridge / supporting what we see / unto the scene that we do not –” She expressed her own personal faith “Given in marriage unto Thee / Oh thou Celestial Host— bride of the Father and the Son / bride of the Holy Ghost” Yet, in contrast she also wrote, “Faith is a fine invention for gentlemen who see / but microscopes are prudent in an emergency –” She was not afraid to be irreverent, “The bible is an antique volume – / written by faded men / at the suggestion of holy spectres -” Sometimes she expressed anger toward a God whom she found distant. “Of course – I prayed – and did God care? / He cared as much as on the air / a bird – had stamped her foot – and cried “give me”

What are we to make of Emily Dickinson and her inner turmoil with belief and unbelief? She was unquestionably a complex person. Her outlook on faith was complicated and it is difficult to arrive at a concise picture of where she actually stood. Scholars differ in their assessments of her. She grew up in a devout household which involved daily family worship. She also lived during a period when the churches of New England experienced revival. This meant that she was exposed to a great deal of spiritual fervour in the parlour, the pulpit, and the pew. Enthusiasm of this sort can be contagious, but for some (and not unreasonably) it raises more questions than answers. She was not a person to be just drawn along.

Emily Dickinson presents a restless figure – unhappy with the place of women in society, the dreariness of daily life, haunted by the spectre of death, reclusive and eccentric. She never found the kind of contentment, peace, and joy which is promised in the Gospel. Perhaps it was not so much a crisis of weak faith, but rather the consequence of never really taking hold of Christ at all. Religious observance does not answer the deep longings of the soul. Is it possible that she failed to get past the packaging and discover the contents?

People will continue to debate the famed poet of Amherst and her relationship to faith. The scriptures however are clear, if she died in her sins, it was because she rejected the overtures of God’s grace and not because He is inaccessible. God opens the door to those who sincerely and earnestly seek Him (Deut 4:29; Prov 8:17; Jer 29:13; Matt 7:7). Salvation is promised to those who come to God through Christ, and in Him there is abundant life (Matt 11:28-29; John 4:14; 6:35; John 10:9; 14:6).

I enjoy the poetry of Emily Dickinson and I find her struggles with faith intriguing, but it is a sad thing and a warning to us all that she may have existed in a Christ saturated environment without ever finding Christ Himself.