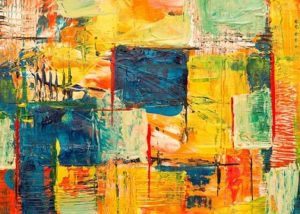 A lot of people don’t ‘get’ abstraction in the arts whether it’s music or painting or literature or film. Obviously abstract expression moves away from conventional forms of expression. Abstraction for some people leaves too much in the way of ambiguity and unfamiliarity – music without a tune; paintings without visual representation of what we can see; literature and movies without standard plots and story composition. They like everything to be set in order; there is a beginning and an end; a discernible structure; boundaries clearly defined; there is no mystery; no uncertainty; there are no unanswered questions. My parents hated movies which concluded with loose ends; it all had to fall into place and make sense before the credits rolled onto the screen – and preferably with a happy ending. Abstraction however, can be misunderstood as though it has no form or purpose which isn’t true; what it does is push beyond the customary reference points. There is greater freedom of expression and interpretation.

In my opinion, abstraction in its own way reflects something of God and His dealings in this world. Life has its blurred edges; things are not as clear as they could be; the story doesn’t always unfold as we would like; the soundtrack of our days isn’t a continuously sweet melody. In the images of M.C. Escher the lines don’t meet where we would expect. Kraftwerk wrote ‘music’ using computer generated sounds; you are not presented with a catchy tune but a soundscape of modern urban living. It is often said that from our perspective life looks like an upside down tapestry. An upside down tapestry resembles a piece of abstract art – messy, blurred, uneven, and without distinct form.

This is not to suggest that God’s dealings in the world are chaotic and make no sense. He has revealed His purposes; He has established principles; He has made promises; there is an end and a beginning. God is not erratic and forever changing; He is dependable and faithful. Nevertheless, within the surety of God’s character and His plan, there is mystery and surprise. God is not domesticated; He is not static; He is not predictable; He is not one dimensional. In a certain sense we can say there is a large measure of abstraction in God and His providence.

Sometimes Christians run the risk of succumbing to a rationalistic approach to faith. We like to think we have everything worked out. The apostle Paul says in this life “we see in a mirror dimly” (1 Cor 13:12). A mirror for Paul was polished metal; the images it presented were blurry and distorted – rather abstract we might say. His point is that our knowledge of God and providence is incomplete. The knowledge we have is true, but there remains a huge dimension of the unknown; there is ‘fuzziness’ in our understanding. It is the sense of mystery and the fact that we don’t have everything worked out that cultivates humility and dependence and reverence. If we leave no place for mystery within knowledge, it leads to rationalism, arrogance and pride. You may not like abstraction in the arts, but in God it is something to embrace.