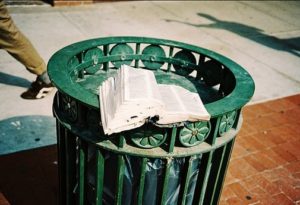 Demas is mentioned a couple of times in the New Testament being identified in Philemon 4 as one of Paul’s fellow workers. Belonging within the apostolic band he held a prominent position and was valued by the churches. Then something went wrong. When Paul was imprisoned in Rome Demas got cold feet. He not only abandoned Paul he abandoned the faith he professed. Paul says of his once trusted friend that he ‘loved this present world’ (2 Tim 4:10). When the cost of discipleship starts to pinch, peace with the world becomes increasingly attractive. With Paul facing a possible death sentence, Demas was left to weigh up his options and earthly comforts won the day over suffering for the name of Jesus Christ.

It is no coincidence that as the church faces increasing pressure in our own day that prominent Christians are tailoring their message to suit; others are going further and abandoning their (professed) faith.

Joshua Harris author of the best-selling book ‘I kissed Dating Goodbye’ decided it was time to kiss Christianity goodbye. He issued this statement on Instagram – “I have undergone a massive shift in regard to my faith in Jesus. The popular phrase for this is ‘deconstruction,’ the biblical phrase is ‘falling away.’ By all the measurements that I have for defining a Christian, I am not a Christian.”

Marty Sampson long time worship leader of Hillsong United tweeted this: “time for some real talk. I’m genuinely losing my faith, and it doesn’t bother me. Like, what bothers me now is nothing. I am so happy now, so at peace with the world. It’s crazy”

Let us be clear, Christians cannot lose their salvation. Christians experience serious doubts and confusion; Christians fall into sin and turn away from Christ in terms of behaviour, but they do not reject Him as their saviour from the heart. Where does this leave the likes of Joshua Harris and Marty Sampson? They have not just fallen into sin, they have denounced faith in Christ. Is there a way back for them? I don’t know. The Bible indicates if these men maintain their present position they were never converted to begin with. They may have lost their ‘religion’ but they did not lose Christ because they never had Christ.

Where does this leave us? It should leave us saddened – saddened that the gospel has been rejected and maligned; saddened that people are prepared to forsake their souls for this world. It should leave us sober – sober to the realisation of how much we need the grace of God; sober to the indispensability of cultivating a healthy, vibrant, growing faith rooted deeply in scripture. Saddened and sober but not surprised “They went out from us, but they were not of us; for if they had been of us, they would have continued with us; but they went out that they might be made manifest, that none of them were of us” (1John 2:19).