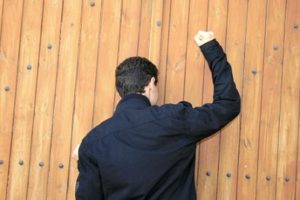 I don’t know how many times I have seen this scenario – Kylie’s phone is on the kitchen table, the volume is on loud speaker and the most dreadful music is playing. Invariably it means she has contacted an organisation (usually government department) and is on hold. Sometimes it has taken two hours to get through to an operator; sometimes they are unable to help and she needs to pursue another avenue; sometimes they have supplied wrong information and she has had to start again.

This process reminds me of the novel ‘The Trial’ by Franz Kafka. In short it’s about a man called ‘Joseph K’ who is unexpectedly arrested one morning. In the remainder of the book he sets out to discover what he has been charged with (he is not told at the time of the arrest). Frustratingly he is passed from one government department to the next and never gets anywhere. In the end he is executed without ever finding out what crime he is alleged to have committed.

Thankfully, having audience with God is not a complex and arduous task. We do not have to navigate the structures of bureaucracy or faceless organisations in an attempt to speak to Him.

• God is accessible: through Jesus Christ we have access to the throne of grace; we might say that ‘the door is always open’. We put up barriers to prayer, God does not.
• God is available: when we call out to Him we do not get put on hold; He is never too busy; He is never out of the office. He is always ready and willing to listen.
• God is interested: He loves to hear from His people. He cares about the details of our lives and does not regard it as an imposition to enter into our struggles. Whatever concerns us, we can take it to the Lord in prayer.
• God is able: just as nothing is too small, so there isn’t anything too big or too complex that His hands are tied. God does not need to pass us on to someone else better equipped to help.

God provides a multitude of precious promises in order to encourage us to seek Him. If we come in sincerity and truth He hears and He blesses. Prov 8:17, “I love those who love me, and those who seek me diligently will find me”

If you don’t meet with God, it’s not because He is hiding from you, but rather you are hiding from Him.