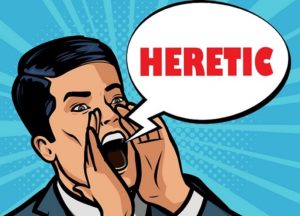 According to the Cambridge Dictionary, mudslinging is ‘the act of saying unfair or insulting things about someone, especially to damage their reputation’ Once you get mud on your clothes it leaves a mark which remains until it is properly washed out. We see a lot of mudslinging in politics to the point that it is basically expected. Who can forget that infamous speech in 2012 when our Prime Minister accused the leader of the opposition of being a misogynist – very strange to call a happily married man and father of two daughters a woman hater. The speech made news around the world and it would seem the stain still remains.

Sadly, Christian people are often no better. Differ to them and they very quickly throw mud. Here are four accusatory terms which in my opinion are far too easily hurled around.

• Apostate: I once heard a well-known preacher say that musical instruments in church worship are the path to apostasy. I am conservative when it comes to corporate worship, but I thought an apostate was someone who had “fallen away” from Christ and was trusting in another means for salvation. At least that is what Heb 6 teaches.

• Heretic: a particular teaching may be considered erroneous but that does not make it heretical. I think Pre-Millennialism is erroneous but I wouldn’t call it heretical. Heresy is a clear deviation from the Bible which takes people away from a correct understanding of God and the way and purpose of salvation. Heresy is soul destroying; there are many less significant errors which are not.

• Antinomian: antinomianism means to set yourself against God’s law; you become a law unto yourself. Because some Christians do not have as strict approach to the Lord’s Day or alcohol or the ‘Regulative Principle’ as other Christians, does not make them lawless. When someone willfully dismisses the clear commands of God they are antinomian.

• Legalist: a legalist expects things from others which God does not. To insist that Christians pray for the church is not legalism; to insist that they rise at 5:00am to do so is. Believers who live orderly and disciplined lives are frequently referred to as legalistic when in fact they are making personal choices for themselves with no reference to anyone else.

Most often people labelled apostates, heretics, antinomians, and legalists are nothing of the sort (sometimes the accusation is warranted). Let us leave the mudslinging to the politicians and remember the generous spirit expressed in the words of our Lord Jesus – “the one who is not against us is for us” (Mark 9:40)