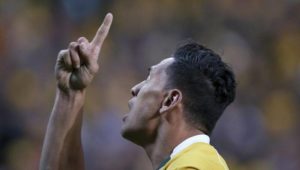 Rugby star Israel Folau quoted scripture on his personal Instagram account in response to a question about homosexuality. His employer Rugby Australia did not approve and is seeking to terminate his contract.

In April 2018 the former Dean of St Andrews Cathedral Phillip Jensen wrote about Folau’s tenuous relationship with Rugby Australia as a consequence of expressing his convictions publically. Jensen penned a thoughtful, biblical and clear piece on Facebook. To begin with he makes the point that all sin is condemned by God; all sin deserves judgement; all sin is forgivable through Jesus Christ. Just because someone recognises that adultery is wrong does not make them an “adulteraphobe”. Jensen said he would gladly play football with adulterers and wouldn’t think of raising it as an issue. The Bible teaches that Christians are to mix freely with adulterers (1 Cor 6:9-11).

Secondly, Jensen indicated that Rugby Australia was bowing to pressure from corporate sponsors. While at that time Folau hadn’t been threatened with sanction, they refused to stand by their player and his right to express his convictions. For this Jensen said, they owed him an apology. Folau was clear that he has no issue playing against or with gay men; he had even promoted the inclusion of homosexuals in rugby. Nevertheless, a year later as a result of quoting scripture in relation to the judgment of all unrepentant sinners, he has been charged with a high level breach of contract and is facing the sack. Rugby Australia is calling for a player who is inclusive to be inclusive all the while it excludes Bible believing Christians.

The increasing hostility toward the Christian faith is alarming, yet perhaps more alarming is the spineless attitude of many Christian leaders. Unlike Jensen, some of the most well-known Christians in the public square have failed miserably to support freedom of religious expression. Instead, they have sought to pander to the dictates of popular opinion.

• Simon Smart from the Centre For Public Christianity “If I’d had the opportunity, I would have urged him to adopt an entirely different posture towards the culture he is hoping to influence”

• The Prime Minister of Australia – a regular worshipper at a popular Sydney church – when asked if he believed that gay people go to hell, responded without any kind of qualification “no I don’t”

It would seem that truth is not only offensive to the world, now it offends professing Christians who find no place for repentance in the gospel message. We need to pray for Israel Folau and we need to speak up for the rightness of his actions. We need to pray for strong, clear Christian leadership. We need to pray for ourselves. Believers need wisdom to convey truth appropriately and courage to stand firm in the face of hostility.

Since writing this, Rugby Australia has formally sacked Folau and it now seems to be heading to court.